Shaal: According to the monthly report of the human rights organization PaanK, 38 people forcibly disappeared in the last month of last year. While Imran Babu, who forcibly disappeared, was killed by the Pakistan Army in Bani Kolwah a village in the Awaran district and his mutilated body was thrown at Buzdad. Dost Muhammad son of Dushambe, who participated in a peaceful demonstration in Hormara a town of district Gwadar, was killed by police violence. In the same month, the Pakistan Army fired mortar shells at the population area of Tijaban on district Kech as a result, a woman was injured.

The report said state institutions used force and tortured people to end the peaceful sit-in in Gwadar. Many protestors, including a senior Baloch political leader Hussain Wadhela, were arrested and transferred to other cities. The women involved in the sit-in were also tortured, which shows that Pakistan is unwilling to allow the Baloch to hold peaceful protests.

“The death squads with the backings of the Pakistan Army and intelligence agencies have turned Balochistan into a vast prison and deprived the Baloch people of their right to life. Apart from providing national rights, basic civil rights have also been taken, and national parties are banned.” Paank’s report further states.

According to Panak, the so-called tribal cheifs have set up their private prisons under state patronage in Balochistan where people are being imprisoned and forced to work, which is a violation of human rights.

In the year 2022, Pakistan army killed 195 and forcibly disappeared 629 people in Balochistan – Paank 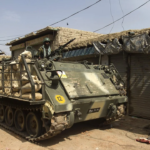 25 schools in Tehsil Jaho of district Awaran are shut down for the last several years, BNM –Welfare Department Report