The Baloch National Movement (BNM) condemns the Pakistani state, for its radicalization policy of Balochistan through the employment of terrorists and terrorist organizations, and the Pakistan backed provincial government of Occupied Balochistan for actively supporting international terrorists like Hafiz Saeed, responsible for the 2008 Mumbai attacks and other acts of cross-border terrorism, in Pakistan’s attempts to radicalize a secular Balochistan. Hafiz Saeed’s rally held in Quetta under state patronage from both the Pakistani and provincial government is nothing less than incriminating proof of Pakistan’s continued active support for religiously motivated international terrorism as a policy instrument. Quetta and its surrounding areas are rapidly becoming a hotbed of global terrorist organizations with camps of terror outfits like the Daesh/IS, Lashkar-e-Taiba and Lashkar-e-Jhangvi mushrooming around the city. The Pakistani state has increased involvement of religiously motivated terrorist organizations such as Daesh, Lashkar-e-Jhangvi and Mussalah Diffah in Occupied Balochistan, traditionally a multicultural society protective of its minorities, to counter the Balochistan independence movement; these terrorist outfits help the Pakistani state by acting as death squads against Baloch patriots and as recruiters for Islamabad’s jihads against India and NATO. The Hazara genocide, the persecution of Zigris, Hindus, Shias and Christians, that have claimed hundreds of lives, is also a result of the same policy. The Pakistani military has helped set up and operationalize two Daesh/ISIS camps in Gichk area of Panjgur, Occupied Balochistan. Both camps recently carried out terrorist operations against the Zigri community in the area, targeting both people and places of worship. Eyewitnesses reported the attackers’ vehicles to be bearing the Daesh’s flag and also the vehicles rendezvousing, after the raids, at the Pakistani military camp in the area. The BNM appeals to the World Powers to help the secular Baloch patriots fight the evermore aggressive threat of extremism that the Pakistani state foolishly believes it can rein for furthering its strategic objectives. 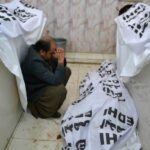 Humanitarian crisis in Balochistan is worse than Syria Iraq and Myanmar. BNM
Next Article Hammal Haidar speaks about Pakistani atrocities in Balochistan
Leave a comment