Geneva, other than being a beautiful city, is the mecca of human rights activists . The UN holds three sessions of the United Nations Human Rights Council (UNHRC) namely in March-April, June-July and September-October of every year. Council listens to and investigates human rights issues from around the world.

The Baloch people have been presenting their case in the UN against Pakistan, who, they say has colonised them, by establishing a well-oiled exploitative system, targeting the region’s vast resources.  After many phone calls and coordination, I reached Geneva where Mr Hatim Baloch, who is the coordinator for the Baloch National Movement (BNM) Switzerland and France Chapter, greeted me and escorted me to meet Dr Naseem Baloch, Chairman of BNM. While we shared greetings in front of the UN building, Pashtun Tahafuz Movement (PTM) was protesting against Pakistani atrocities against Pashtuns.

Dr Naseem took the Chairmanship of BNM in April this year and is himself a torture victim at the hands of the Pakistan Army. Over lunch he spoke about his submission to the UN, Baloch “genocide” by Pakistan and measures taken by Baloch groups to ally together.

We call for sending a UN fact-finding mission to Balochistan-Dr. Naseem Baloch

Posted by Dr. Naseem Baloch
Dr. Naseem Baloch is the chairman of BNM. He joined the national movement during his student days. Due to his dynamic character, he was also forced to disappear by the Pakistani army. He played a crucial role in organizing BNM in the Diaspora. Before being elected Chairman, He was the organizer of the BNM Diaspora Committee.
Previous Article 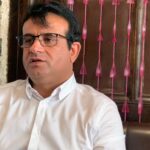 We call for sending a UN fact-finding mission to Balochistan-Dr. Naseem Baloch
Next Article