Germany: On 22 October, Baloch National Movement run an awareness campaign in Chemnitz City of Germany against the ongoing wave of fake encounters of Baloch Missing Persons.

The member of Baloch National Movement Germany give speeches, distribution pamphlets regarding the fake encounter of forcibly disappeared persons and chanted slogans against Pakistani continuous atrocities in Balochistan.

Zahid Baloch said, “Since Pakistan has been controlling the people of Balochistan through constant suppression. Hence, in the last two decades, the level of atrocities by Pakistani forces have been increasing incrementally. According to Voice for Baloch Missing Persons (VBMP), in last two decades, more than 45000 people have become victims of enforced disappearances in Balochistan.”

Asghar Ali, the President of the BNM Germany Chapter while speaking to Radio Zrumbesh reporter said, “ 442 reportedly were abducted by Pakistani spy agency and security forces only in 2021. Later on 170 were released after mental and physical tortures. Similarly, 366 people were killed in Balochistan in same year. Among them, 46 people were killed in fake encounters by Counter Terrorism Department (CTD).”

He added, “Worst of all, the cases of enforced disappearances in Balochistan have increased in 2022. From January to September 451 people in Balochistan became the victim of enforced disappearances. In this duration, 36 students were also forcibly disappeared. 366 people were killed at the same time. A bookseller Lala Faheem Baloch was arrested on 26 August 2022 and later on disappeared since then his were abducted are unknown. Waseem Tabish, a poet was disappeared by spy agency on 15 June 2021 and he was killed in a fake encounter on 17 October 2022.

Recently more than 500 mutilated dead bodies were discovered at Nisther hospital University Multan. It is firmly believed that those were the dead bodies of Baloch Missing Persons who were abducted by Pakistani security forces at different times.”

He concluded, “Balochistan is an information Black Hole, where no news come to media due to strong military control. Foreign journalists and reporters are not allowed to visit Balochistan.” 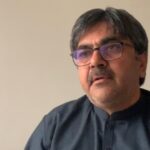 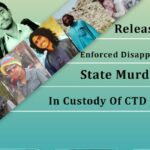 Balochistan: 38 people were forcibly disappeared in October while 14 were killed in fake police encounters – Paank Monthly Report
Leave a comment