A statement released by the Baloch National Movement (BNM) said Balochistan is facing barbarism because of its strategic location in the region. To perpetuate its occupation on the resources of Balochistan, Pakistan is using different tactics and excessive violence.

Pakistan, China and other powers are engaged in an attempt to grab a share of Balochistan’s resources. But the Baloch people have rejected all these elements and powers. Pakistan has put aside all international and humanitarian laws and has initiated a new series of atrocities in Balochistan which continue unabated.

The Baloch people have fought against these atrocities in a brave manner to save their homeland from this plunder. The sacrifices of thirty thousand missing Baloch have been a source of inspiration and helped unite the nation. The blood of thousands of martyrs are a source of commitment for the continuation of our struggle.

Pakistan has admitted the arrest of 15,000 of 30,000 thousands Baloch abducted just last year. Despite their admission, the army has not presented them before any law or institution. Rather, they are constantly trying to keep an atmosphere of fear among the Baloch people by keeping them in secret torture cells. No one can leave their homeland and resources to the occupier due to the fear of violence. The Baloch nation will remain a barrier against the plunder of their resources till their freedom.

China is a partner of Pakistan in committing war crimes and crimes against humanity in Balochistan. China has started preparations to use the Baloch coast for military purposes against other nations in the region through agreements with Pakistan, against the will of the Baloch nation. But the Baloch will not allow its soil to be used against others, today or after the freedom.

Pakistan, with China’s money, has stepped up the Baloch Genocide. After the announcement of so-called development and China Pakistan Economic Corridor (CPEC) projects, the population on the CPEC route has been constantly victim of military operations and aerial bombing. More than one and half lakh of displaced Baloch are forced to live in displaced areas. Military operations and warships patrol continued in different areas of Kolwah, Balochistan on Sunday.

All these areas are on the route of CPEC and that is why they are becoming victim of continuous barbarism. Pakistani military operations and genocide continues in Naseerabad and Dera Bugti.

Dead bodies of two brothers Ali s/o Luti and Lalli s/o Luti found from Dera Bugti area, who were executed by Pakistani Army during a military operation on 18th October 2016.

Pakistani army is engaged in ground and air operations for several days in different areas of Kalat, Kharan and Noshki. Due to lack of communication system in remote areas, we have not been able to receive details. But we fear loss of lives and abductions in such barbaric military operations. In the same areas during the months of April and May, Pakistani army had put chemicals in the fountain waters, killed and abducted several civilians. 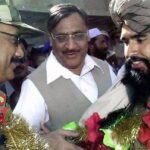 Terrorism seeping through all Pakistan institutions: BNM
Next Article 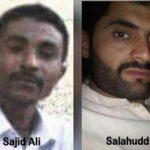