Shaal: Chairman Dr. Naseem Baloch chaired the first cabinet meeting of the Baloch National Movement with the full participation of the cabinet. In the cabinet meeting, many organizational decisions were taken, including maintaining the continuity of the solidarity programs with the families of the forcibly disappeared persons and encouraging the party workers and supporters to help the flood victims.

In the meeting, the current situation of Balochistan and the agenda of organizational progress were discussed. The Constitution Committee presented the constitution draft based on the changes made in the last session, which was reviewed and approved by the Cabinet for publication.

After reviewing the performance of foreign and other departments, the cabinet directed all the institutions to work in a coordination and decided that the Foreign Secretary would write letters to human rights organizations about the situation of Balochistan based on the reports of Paank.

Members were assigned special responsibilities to make the party vibrant under the cell system in different regions of Balochistan and Sindh.

Addressing the meeting BNM Chairman Dr. Naseem Baloch said that after the session in short period, significant changes occurred and considerable issues surfaced in Balochistan. Incidents like custodial killings of forcibly disappeared persons in Ziarat, killing of civilians at the hands of the Pakistan Army, Pakistan Army attacks on houses in Kharan and Mastung, and the incident of enforced disappearances happened during this period, while millions of people were affected by floods.

The Chairman said that we would always keep our performance stable and try to improve so that we succeed in our goal.

Posted by InfoSecBNM
Follow:
The Information and Cultural Secretary of BNM is the party's spokesperson and is responsible for the party's publicity and issuing of statements.
Previous Article This month, the Pakistani army killed 7 people in Balochistan by straight firing – BNM
Next Article 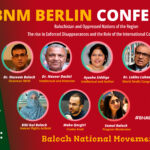