The Baloch National Movement Central Spokesperson said in a statement that the Pakistani state is committing gross human rights violations against the Baloch Nation to enforce its occupation of Balochistan. The Pakistani state, through its policy tools of Abduct & Kill, heavy-handed military tactics, including the use of aerial shelling and bombardments, and the use of radicalization of Baloch society through extremist religious groups and their militant wings that act as death squads for carrying out state sponsored terrorism, particularly political assassinations and indiscriminate attacks like those carried out against Balochistan’s lawyers at the Civil Hospital Quetta in August this year and recently, in October, the Balochistan Police Cadet College Quetta massacre, in which police academy graduates had been called back to the poorly secured police academy in Quetta for, still, hitherto unknown reasons.

On October 2, 2016 the Pakistani state, in accordance with its Abduct & Kill policy, dumped in Gwadar the bodies of residents of Pasni, Sajid, abducted on January 31, 2013, Sabir son of Mohammad, abducted August 4, 2014, Salahudin resident of Mashkay, abducted on March 25, 2015 and 14 years old school boy Zafar son of school teacher Abdul Rashid, abducted August 13, 2016. The enforced disappearances/ abductions of the victims, whom the Pakistani state is claiming to have killed during a counter terrorist operation, were reported to international and local human rights organizations, media and the international community. Like previous cases, the recovered corpses had notes bearing the victims’ identities and addresses, a standard identification method, for Abduct & Kill victims, used by Pakistani forces.

The Pakistani state uses terrorism as a pretext for killing Baloch activists and civilians alike. Elsewhere in Balochistan the Pakistani state has intensified its incursions. The Pakistani army, air force and death squads are carrying out military raids in different areas of Awaran, Dasht, Gwadar, Kech, Kolwa and Talaar. Pakistan air force warplanes were seen flying low over the targeted areas and there is a telecommunications blackout in-force in the affected areas.

The Pakistani state has intensified its genocidal operations against the Baloch Nation to satisfy imperialist China’s concerns regarding its USD 46 billion investment in the non-sustainable Pakistani economy for establishing China’s footprint, in particular, its war machine, in the strategically vital Baloch homeland via the China Pakistan Economic Corridor (CPEC). The current raids by the Pakistani forces are being carried out to secure the route of a cargo convoy in transit from China to Gwadar.

The Baloch National Movement (BNM) is reporting all Pakistani war crimes to both local media and human rights organizations’, whose attitude towards the Baloch genocide can be described of apathy or fear of the authorities at best, and the international community, international media and human rights organizations who seem to be held hostage to the Pakistani state’s tendencies towards Talibanization and its nuclear bargaining chip. However, ignoring Pakistan’s blatant crimes against humanity in Occupied Balochistan is synonymous to handing the Pakistani state a license for genocide.

The BNM, once again, appeals to the world powers, international community and international human rights organizations and media to hold the Pakistani state and imperialist China responsible for the crimes against humanity they are committing in Occupied Balochistan before it’s too late. 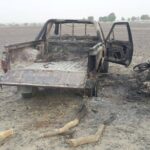