The spokesperson of the Baloch National Movement condemned the military aggression in different areas of Bolan and said that Pakistan was taking the Baloch genocide to a new level. The killing of people had been continuing unabatedly in the length and breadth of Balochistan. Human rights were brazenly flaunted in those military operations.

The spokesperson confirmed that Dozens of men, women and children had been detained and forcibly disappeared in ongoing military operation in Bolan.

“During this military aggression, the mutilated body of ‘Mohammed Ghaus Marri’ was found at Saffari near Sangan on November 4, who had been forcibly missing and was in the custody of the Pakistan army since September last year (2021).” Added he.

He said that the Bolan operation is part of the ongoing collective punishment against the Baloch nation. Pakistan army has turned the Baloch homeland into a Nazi-style concentration camp and is clearly violating the laws of war. In the ongoing operations, women and children are being brutalized collectively. Prior to the Bolan operation, the Ghichk area of Panjgur was completely converted into a concentration camp by the Pakistan Army Where it has been made mandatory to take permission from the army for normal transportation and by limiting the ration of the residents, they had been banned from buying more than the prescribed limit.

The spokesperson said that collective punishment shows the failure and cowardice of Pakistan against Baloch Freedom fighters. Whenever the Pakistan army is defeated on every front and it takes revenge from the unarmed people. 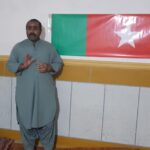